A Florida woman and her grown son were indicted Wednesday in the killings of her husband and sister that took place 25 years ago in New Jersey, according to authorities.

Dolores Mejia Connors Morgan, 66, and Ted Connors, 47, both of Del Ray Beach, are each charged with two counts of first-degree murder in the 1994 slaying of Ana F. Mejia, 24, and the 1995 killing of 51-year-old Nicholas William Connors, Monmouth County Prosecutor Christopher J. Gramiccioni said in a news release. Both killings took place in the victims' homes in Long Branch, a beachside city about an hour east of Trenton.

A third person, Jose Carrero, 48, of Jackson Township, New Jersey, was also charged with murder in both homicides, Gramiccioni said. Carrero, who, like Morgan and Ted Connors, was arrested Jan. 10, pleaded guilty Friday to two counts of second-degree conspiracy to commit murder in a plea deal with prosecutors.

Jose Carrero said a friend's mom enticed him with promises of money to help kill her daughter and husband more than 25 years ago in Long Branch. https://t.co/gSfl0uyOhB

Media reports at the time of the killings indicated that Mejia considered her sister and brother-in-law her parents. An obituary that ran in the Asbury Park Press under the name Ana Mejia-Jimenez listed them as her mother and father, and Ted Connors as her brother.

Mejia was found dead Dec. 8, 1994, in the bedroom of the apartment she shared with her boyfriend and her two young children, Gramiccioni said.

"Mejia was stabbed multiple times and had a white powdery substance rubbed on her face when she was found. Her children were found safe within the residence," the prosecutor said in a news release.

Investigators initially believed it was cocaine that had been smeared on Mejia's face, including inside her nose. According to NJ.com, however, the white powder found around Mejia's nose and mouth was determined to be baby formula.

Mejia had been stabbed 23 times and news reports at the time indicated her body was mutilated. 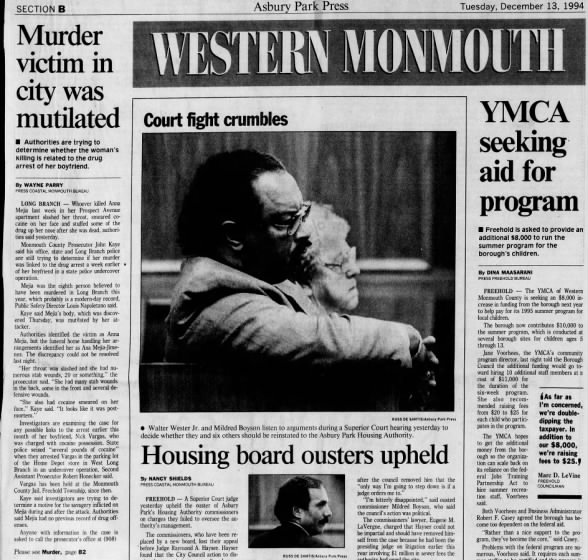 "Six months later, on May 14, 1995, Long Branch police officers were dispatched to the Van Dyke Place home of Nicholas Connors, 51," the news release said. "There, authorities found Nicholas Connors on a sofa, deceased after multiple gunshot wounds to the head."

Morgan, then 42, was the person who found him dead, NJ.com said. Two of the couple's children, ages 13 and 12, were home but slept through the shooting.

“By habit, he would wait for her to come home before going to bed,” then-Monmouth County Prosecutor John Kaye told the Asbury Park Press in 1995. “She found him on the couch, and there was blood all about.”

Gramiccioni said last week that Carrero admitted conspiring with Morgan and Ted Connors "to kill Mejia in retaliation for what they believed were her actions to tip off law enforcement officers about the illegal activities of her boyfriend." An Asbury Park Press article published in 1994 indicated that Mejia was slain a week after her boyfriend was arrested on drug charges. 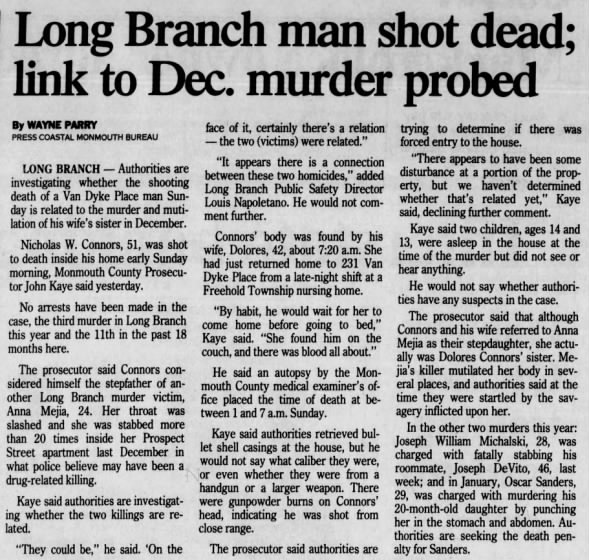 NJ.com reported Carrero said in court that Morgan feared her sister, who was allegedly working as a confidential police informant, would also tip detectives off about her illegal activities. She determined Mejia had to die, he indicated.

Carrero told the court that he met with Morgan, who said she would pay him to help with the killing, and Ted Connors in the kitchen of the Connors home in 1994 to plan the hit on Mejia. He said he and Ted Connors planned to go to a party together the night of the crime to establish an alibi, NJ.com reported.

He said he and Ted Connors left the party and parked down the street from Mejia’s house so no one would see Connors’ vehicle, the news site reported. They went to the house and Mejia opened the door for him and her nephew before returning to her bedroom.

Carrero said he covered Mejia's face with a pillow while Ted Connors stabbed her because he "didn't want to see her" as she died, NJ.com said.

After the murder, the pair returned to the party to maintain their alibi, Carrero said.

BREAKING: Today a Monmouth County grand jury returned a 7-count indictment charging counts of murder and conspiracy against Ted Connors and Delores Morgan for the 1994-95 killings of Ana Mejia and Nicholas Connors. @LongBranchPD

Nicholas Connors "was killed in a successful effort to collect on a life insurance policy," Gramiccioni's news release indicated.

NJ.com reported that Carrero said in court that he, Morgan and Ted Connors again sat at the kitchen table of the family's home to plot out the husband and father's killing. He said Ted Connors obtained a gun and Morgan went to work that night so she would not be home when her husband was slain.

Carrero said he and Ted Connors again parked down the street from the house before walking to a side door and slicing the screen to make it look like a break-in. When they went inside, Carrero said he could hear a television in the next room.

He said he remained in the kitchen while Ted Connors went in and shot his father, the news site reported. When he heard a second shot, he fled and ran to the car, with Ted Connors a couple of steps behind him, NJ.com said.

News reports at the time indicated investigators almost immediately suspected the killings of Mejia and Nicholas Connors were related.

Jose Carrero, 48, of Jackson, Ted Connors, 47, Dolores Morgan, 66, both of Del Ray Beach, Florida, have been charged in two 25-year-old homicides. Each are facing two separate counts of Murder related to the deaths of Ana Mejia and Nicholas Connors. https://t.co/FT6wEhwv4E

Carrero said he was never paid outright for the crimes but Morgan loaned him cash at one point and he didn’t pay it back. He also lived at the family’s house for a while, rent-free, until Morgan kicked him out, the news site reported.

As part of his plea deal, Carrero has agreed to testify against both of his codefendants. Gramiccioni said in exchange for his testimony, prosecutors would recommend consecutive sentences of five to 10 years in state prison for each of the two charges to which he pleaded guilty.

The prosecutor said investigations into the Mejia and Nicholas Connors killings were launched back in 1994 and 1995 but the cases went cold.

A Monmouth County grand jury handed up an indictment charging Dolores Morgan and her son Ted Connors with murder in the 1990s killings. https://t.co/meqcYiS6Cq

Cold case detectives also found that both the men accused in the crimes had confessed their alleged involvement to multiple friends.

"The information given to (the friends) by Ted Connors and Jose Carrero is supported and proven to be true based on additional information discovered and confirmed in the current review of the file and additional investigation conducted over the last two years," the affidavit read, according to NJ.com.

The investigators also recently uncovered a transcript of a recorded conversation Ted Connors had with a friend about the crimes in 1995. Police re-interviewed one of the witnesses and obtained a new statement from him a couple of months ago, the affidavit said.

Carrero's sentencing was scheduled for June 5, but prosecutors told NJ.com it would not take place until he had testified against Morgan and Ted Connors.

Both mother and son remain jailed without bond in the Monmouth County Correctional Institution.

Crystal Bonvillian, Cox Media Group National Content Desk
© 2023 Journal-News.
All Rights Reserved.
By using this website, you accept the terms of our
Visitor Agreement, Privacy Policy, CCPA, and understand your options regarding Ad Choices.
Learn about Careers at Cox Enterprises.
Back to Top